Frank D’Aleo, the owner of a home building and remodeling company, left the Main Street home he was working on and walked a few blocks north to meet me at Tazza Cafe in Ridgefield. His broad smile and friendly demeanor brought a warm spirit to the already sunny Friday afternoon. One would never guess the story behind the man; so surreal yet so woven into the fabric of America. Over the next thirty minutes I realized the person sitting across from me was no ordinary individual.

On September 11 of 2001, D’Aleo, an Emergency Medical Service (EMS) paramedic for St. Claire’s Hospital in New York City, reported to work at 8:00am for his 16 hour shift. Less than an hour after arriving at work, D’Aleo says,” We heard the echo of a crash.” His 16 hour shift turned into a four day encounter with tragedy; the magnitude of which no human being could ever fathom. 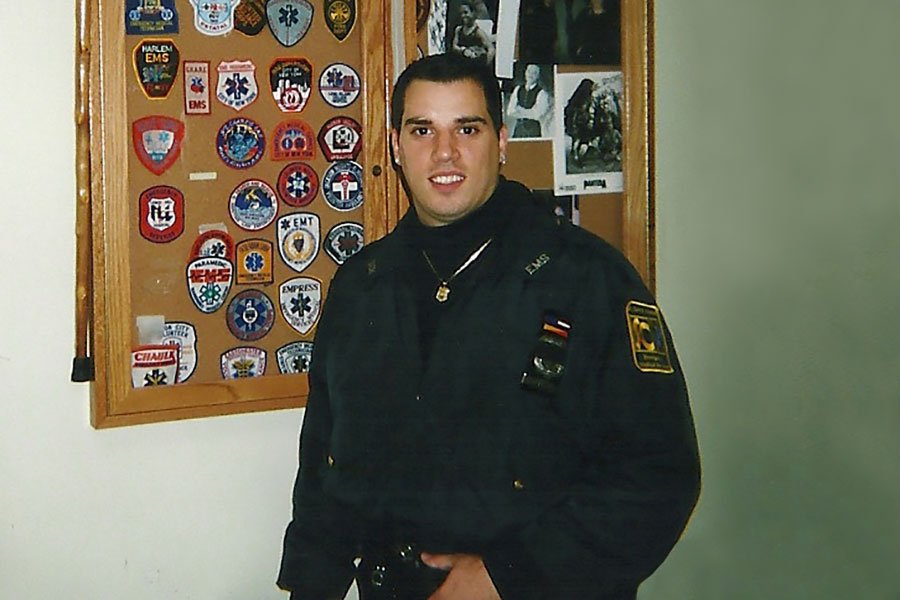 D’Aleo and his EMS partner, Paul Donacci, arrived The World Trade Center just after American Airlines flight 11 struck the North Tower (1 World Trade Center) .  “At the time, we just thought it was an accident,” says D’Aleo.  But within 15 minutes a United Airlines Jetliner, moving more than 500 mph crashed into the South Tower (2 World Trade Center).  “When the second plane hit; all bets were off.  The feeling was, we’re all not going to make it. We knew we were under attack,” says D’Aleo.

D’Aleo and Donacci set up a triage unit in the lobby of the North Tower. “We needed to pull people out of the street and away from the debris, for the more serious, we couldn’t stick them in an ambulance until we stabilized them first , so we set up an on-site hospital in the lobby,” he explains.

D’Aleo has an indelible vision of what happened next that still weighs heavy on his heart and mind. His voice shaking and eyes welling with tears as he recalls, “We heard the creaking. We knew the steel was bending and the glass started to break. The fire chief yelled, the building is coming down, get out.” Thirty to forty seconds is all the medical personnel had to escape the crumbling tower. “We just ran. We left the patients.” D’Aleo is silent for a few seconds and gets his bearings before he continues. “It bothers me when I think about how I had to leave all of those people there, but, if you’re going to pick them up and carry them over your shoulders, you’re not going to make it,” says D’Aleo.

D’Aleo and Donacci fled the lobby of the tower. They were separated in the chaos of the moment.  D’Aleo realized he could not outrun the catastrophe behind him and took cover under parked van. Huddled under the vehicle with D’Aleo were two firefighters. “We were under the van, it seemed forever, but it was probably 10-15 minutes and had to dig ourselves out. We were sharing the air tanks they [the fire fighters] had. Two of us would breathe and one would dig and then we’d switch off, ” he explains.  D’Aleo would never get the names of the fire fighters.  “I still wonder about them,” he says.

Buried in the wreckage, the three rescue workers had to rescue themselves. They dug through about 2 feet of debris that covered them beneath the van. “When we got out from under it was just mounds and mounds of debris and body parts. There was screaming and crying. The fireman have this device on them so if they go horizontal, it sets off-it sets off loud tones to let everyone know there is a man down. The tones were going off constantly…it was survival at this point.”

D’Aleo immediately began efforts to save lives. “After the buildings came down, we had abandoned all our stuff so now we had to scrape things together. If we saw an ambulance that hadn’t been crushed we’d break the windows so we could get at the materials. ” 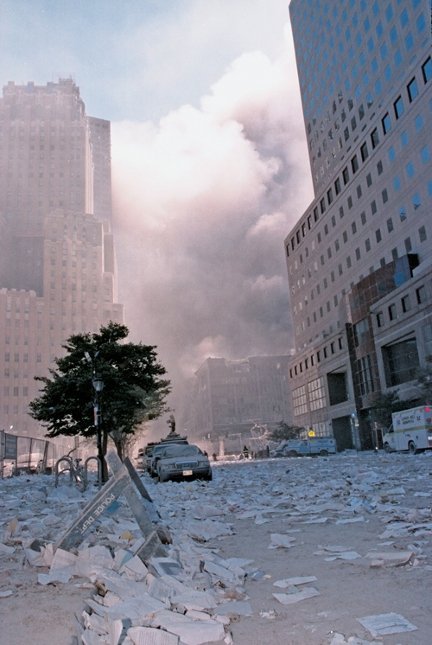 People were trapped in the confines of 20-30 feet of debris in various areas throughout ground zero. “The area I was in was about a block and a half long, surrounded by debris,” explains D’Aleo. For more than six hours there was absolutely no communication with vast world outside. “You were just yelling to the people…in my section there were about 15-20 people helping the injured.” D’Aleo did everything humanly possible to save lives. “We were all these people had. We were all that was left,” explains D’Aleo. There is a long pause before D’Aleo continues. “When you have to play God and say, I’m going to let you go but help you…it’s hard, but you have to make that decision. You don’t have time to mull it over, time is precious.”

Two dozen people are alive today because of courageous efforts of D’Aleo. “We carried the people in our coats and climbed over the mounds of debris. They were staged there to find their strength and walk north or wait until someone could get to them to take them away,” explains D’Aleo.

It’s been a decade since the terrorist attacks orchestrated by the global militant Islamist group al Qaeda and America is forever changed.  D’Aleo explains life as a New York City paramedic after our country was brutally attacked. “March 21, 2008 was my last day in EMS. “We had thousands of hours of new training after 9/11. We had to prepare for a post 9/11 world: Bio Warfare, structural collapse.”

After the birth of D’Aleo’s first child in 2007, he changed careers and moved away from the city to the suburban community of South Salem, NY. He launched his own construction company called Finishing Touch Contracting and set his sights on providing a nurturing, safe and stable life for his family. He has succeeded. “I will never forget the events of September 11, but I also can’t mourn it all the time. I need to move on and let it go,” explains D’Aleo.  And this September, D’Aleo has a lot to smile about. He will celebrate seven years of marriage to his wife Megan, attend the wedding of his longtime Emergency Medical Service partner, Paul Donacci, and welcome his second daughter into the world.

D’Aleo is humble about the role he played saving the lives of innocent victims. “I chose a career knowing that somehow, someday somewhere I was going to be put in the line of fire on some level.  I was doing my job. I’m not a hero.  The people who were in those towers, they are the heroes. They were doing their banking or sweeping the floors. They chose careers that didn’t put them in harm’s way.”

This story was first published in Ridgefield Magazine.

We will review your information and get in touch with you within 24-48 hours to discuss your project.